×
Have a question?
Clinics in London and Bedford
Open Mon-Fri 9-5pm
News and Publications | Bone Marrow

The spongy tissue inside some of the body’s bones, such as the hip and thigh bones is known as bone marrow. Immature cells or stem cells are found in the bone marrow.

Many people who have blood cancers, including leukemia and lymphoma, sickle cell anemia, and other life-threatening disorders, depending on their bone marrow to survive.

It can also be used to harvest stem cells to repair knee cartilage damage.

To live a healthy life, healthy bone marrow, and blood cells are needed. As cancer causes it to stop working properly, a marrow transplant may be the only recovery option.

What is bone marrow?

Blood vessels and capillaries are abundant in all forms of bone marrow. Every day, it produces more than 200 billion fresh blood cells producing the majority of the body’s blood cells.

There are two groups of stem cells in the bone marrow: mesenchymal and hematopoietic.

The red bone marrow is a small, highly vascularized fibrous tissue that is rich in hematopoietic stem cells. The stem cells are capable of forming blood.

Stem cells are immature capable of differentiating into a variety of different cell types.

The regenerative ability and efficacy of the various forms of hematopoietic stem cells vary.

Some are multipotent, oligopotent, or unipotent, depending on the number of cell types they can generate.

The following are the characteristics of pluripotent hematopoietic stem cells:

They have the ability to regenerate another cell similar to their own.

They will differentiate into one or more subsets of more mature cells.

Hematopoiesis is the mechanism by which these pluripotent stem cells differentiate into various blood cells.

These stem cells are needed for bone marrow transplantation.

Stem cells differentiate and generate new cells on a continuous basis. Any newly created cells remain stem cells, while others undergo a maturation process as precursor or blast cells before being formed, or adult blood cells. Per day, stem cells quickly replicate and produce millions of blood cells.

Blood cells have a finite shelf life. This time period is between 100-120 days, being replaced on a continuous basis. Therefore, it is important to generate stable stem cells.

Only mature blood cells possess the membrane proteins necessary for attachment to and passage through the endothelium of the blood vessel. Hematopoietic stem cells, on the other hand, will breach the bone marrow barrier. These can be obtained from peripheral blood or circulating blood.

The red bone marrow’s stem cells replicate and mature into three distinct forms of blood cells, each with its own function:

Red blood cells (erythrocytes) are responsible for transporting oxygen across the body.

Leukocytes (white blood cells) aid in the battle against infection and disease. Lymphocytes – the immune system’s building blocks – and myeloid cells, which comprise granulocytes such as neutrophils, monocytes, eosinophils, and basophils

Platelets (thrombocytes) aid in the clotting process after damage. Platelets are cytoplasmic remnants of megakaryocytes.

Once, adult, these blood cells migrate from the bone marrow into the bloodstream, where they perform critical functions necessary to maintain the body’s health and survival.

The bone marrow cavity contains mesenchymal stem cells. They distinguish into a variety of stromal lineages, including the following:

In adults, it contains both red blood cells and platelets and about 60% to 70% of lymphocytes. Others begin their lives in the red bone marrow and mature in lymphatic tissues such as the thymus, spleen, and lymph nodes. 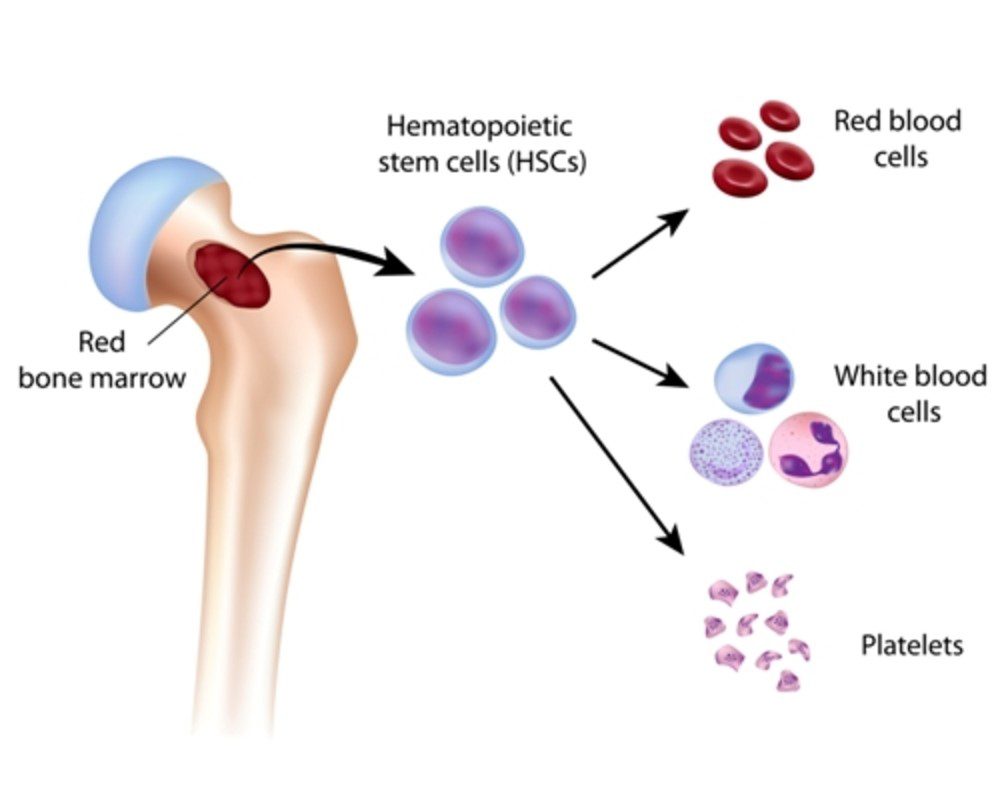 Together with the spleen and liver, it is used in the removal of old red blood cells.

This type is mostly used to store fats. It contributes to the provision of sustenance and the maintenance of an optimal condition for bone function. However, under such circumstances, such as extreme blood loss or fever, the yellow marrow can revert to red.

Yellow marrow is typically found in the central cavities of long bones and is covered by a layer of red marrow characterized by long trabeculae within a sponge-like reticular system.

Bone marrow begins to mature in the clavicle near the end of fetal life, prior to birth. About three weeks later, it becomes operational. At 32 to 36 weeks of birth, it takes over from the liver as the primary hematopoietic organ.

The bone marrow remains red until about the age of seven years due to the strong demand for fresh continuous blood formation. The body’s red marrow is eventually replaced by yellow fat tissue as it ages. Adults have an excess of 2.6 kg (5.7 lbs) of bone marrow, of which about half is red.

Adults have the greatest abundance of red marrow in the vertebrae, hips (ilium), breastbone (sternum), ribs, and skull, as well as at the metaphyseal and epiphyseal ends of the long bones of the arm (humerus) and leg (tibia) (femur and tibia). Yellow marrow fills all other cancellous, or spongy, bones and the central cavities of long bones.

Blood cell development occurs as a result of hematopoietic stem cell differentiation in the red marrow.

Certain conditions can result in an increase in blood cell output. This may occur as body tissues’ oxygen content is depleted when blood is lost, or anemia occurs, or when the red blood cell count decreases. When any of these conditions occurs, the kidneys develop and activate erythropoietin, a hormone that activates the bone marrow to produce more red blood cells.